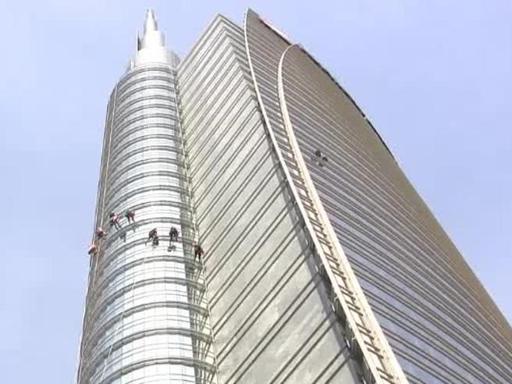 Milan is now a street art in the open air. Ten years ago the writer were denounced and prosecuted, now multiply the initiatives of the city of Milan which uses street art as an element of urban decoration. In Milan there is experiencing a renaissance of street art. In recent years many artists were invited by the city of Milan to paint the same things that long ago were illegally. Many initiatives by associations of Urban Art worked together to beautify Milan. Among the many initiatives we find we find the Energy Box, 50 artists have painted with regular permit on 150 traffic lights control units dotted around the city, turning the unsightly grey curious and colorful works of Parcheesi stree art. Street art colors and while computers to beauty. Yet “100 free walls” made available by the railways, or the famous “manholes” in some ways as “Montenapoleone and Via Tortona” or even some walls on the naviglio Pavese, or on the wall of quartiere Isola.

Not forgetting “i muri dell’ippodromo di San Siro”  (the walls of the San Siro race), where every year hundreds of street artists fill 1 Kilometer long wall color. It feels like you are spinning down open air arts galleries, some leave truly breathless by the beauty.                  Underground red and lilac: San Siro

Do not miss a visit to the San Siro race course, where you can admire the fascinating event of horse racing. You will also find large play areas for children.

3) Ride your bike along the Navigli

Bicycling around Milan is the best way to see some areas of Milan. Unfortunately the bike lanes are still few compared to those that we would like but definitely some areas deserve a nice bike ride. For example on Sunday mornings, you could choose among several options, cycling along the canals, canals of Milan. If you don’t have any friends that can lend your bicycle, you may rent bicycles in Milan with BIKEME

-The bike path along the Naviglio Grande, in the area of Porta Genova, in the city center through the open countryside and pretty villages of Newbridge, and Abbiategrasso. The journey is approximately 30 km in total, and you can come by train.

-The path starting from the Naviglio Pavese going up to Bereguardo.

-The cycle of the Martesana Canal, from the area of Joy in town at the river Adda, 40 km away.

4) Dance in the streets

This trend started a few years ago, it is said that besides being born from the passion of the dance is the daughter of the crisis and the expensive Club in Milan.

The born out of tango and folk dance groups enthusiasts, this ritual called “Tango illegal and clandestine Mazurka”, decided to organize impromptu dance parties in the streets and squares of the city at night. The seats are kept secret until the very last, but two landmarks are Square and courtyard of the building in the region. In any event, an evening dancing (or just watch the people dancing) is definitely a fun way to spend an evening, socializing, dancing and having fun … at cost 0.

Speaking of Squares is one of those important Business square, seat of the Italian Stock Exchange. Where you can catch the irony of irreverent sculpture of Cattelan, positioned right in front of the building daily peopled by bankers.

Monumental cemetery is an open air museum. Within this space there are tombs, statues and gravestones of illustrious Milanese, while under the octagonal dome is the tomb of Alessandro Manzoni. Hosts events and you can visit it with free guided tours. Like every big city even Milan has a large cemetery, but the cemetery is nothing short of spectacular. It’s a real ‘ city of the dead ‘, is a place where the history of Milan lives through the tombs and statues of its most illustrious inhabitants. The monumental cemetery, known as the “open air museum”, even if you’re not passionate like dark, you can admire works of art walking among the graves of famous historical figures in Italy. Definitely wandering the narrow streets the atmosphere may be a little disturbing but I assure you it is an experience to do. If you want you can also participate in organized tours  tour organizzati gratuite

First the multicultural neighbourhood of Milan, Chinatown is definitely worth a visit. The main road is Via Paolo Sarpi, for years has been made pedestrian. Chinatown is especially fascinating when they celebrate Chinese new year, when the lanterns illuminate the streets, dragons and Lions dance and parade along the way, accompanied by the sound of the drums.

8) Discover the skyscraper at Porta Nuova

Not far from Garibaldi station, you can’t miss the Porta Nuova area, the new steel-and-glass ‘. The central focus is the beautiful  Gae Aulenti square. Sitting around the fountain and stand with your nose up looking at the building’s Spire Unicredit, the highest of the city, makes my head spin. Admire the artwork Egg just around the corner, with brass pipes that you can hear the sounds of the city is very funny. Continuing the journey along the walkway of the vertical forest, a tall apartment building with trees and bushes planted on each terrace, you reach the Isola neighbourhood ( quartiere Isola )  another neighborhood of new restructuring that is absolutely worth a visit.

Pinacoteca of Brera with 2 euro ticket

After the success of  the Thursday night at the museum of Brera, when the price of entering was fixed on 2 euro,...

10 free things to do in Milan

1) VISIT THE CIVIC MUSEUMS Every first Sunday of the month (Sunday at the Museum) and on the third Tuesday of the...