Launched in 2009, the urban renovation plan covered the area between Porta Garibaldi, the island and the former railway station of Porta Nuova, also known as “Varesine” because the terminus for trains from Novara, Gallarate and Varese, decommissioned in the early 60 and replaced the current Porta Garibaldi station. The project – which involved a team of internationally renowned architects – has redesigned the area with a complex of buildings with different functions: tertiary, commercial and residential purposes. Combines the different zones, a pedestrian system comprising green areas, squares, bridges and trails. Among the most significant buildings of this project lies the complex of towers that overlook piazza Gae Aulenti – including one that houses the offices of Unicredit, the highest in Italy – the Diamond Tower, and vertical forest, two residential towers with terraces laid out at which arise in the Isola neighbourhood between via De Castillia and via Confalonieri.

For people who want to take advantage of this tour, to do some shopping at a good price, the lower level can be found on ESSELUNGA Supermarket.

Another work of art that we find in the process of Piazza Gae Aulenti is the sculptural work of Alberto Garutti. The project is developed vertically through the architecture for the four levels. Twenty-three metal tubes chrome plated brass stretch through the space vacuum , transporting the sounds of the city and the words of the citizens, thus giving life to the work, just like a great musical instrument. As for the meanings, there was a clear vocation of “social” by connecting visual-auditory the various plans that make up the very structure of the building container and the latter, together with the passers-by that frequent it, communicating, in their turn, both of them, both with the outside urban, in fact, another definition of work is “the voices of the city”.

In fact, by placing the ear at the time of its opening, you may hear sounds, noises, words from an other point of building, without knowing what this is or where it is located. 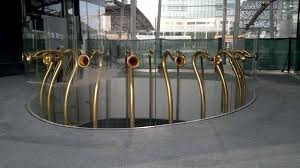 Going down the pedestrian street that flanks the Vertical Forest we arrive at the District Isola. The district takes its name from certain areas that bordered old farmhouses in the area – called “islands” – but also from the real condition isolation of its urban environment than the rest of the city. Since then this unique isolation has allowed the district to maintain a specific identity, fostered by a functional mix of residence and workshop, which together with the dissemination of cultural, local associations and meeting rooms make it one of the liveliest areas in Milan, in fact, the last is the nerve center of Milan’s nightlife with numerous bars and restaurants. The new reconfiguration of the Garibaldi-Repubblica, through a vast system of green spaces and pedestrian areas, has finally integrated the island to the rest of the city.

In the district Isle we also find the Riccardo Catella Foundation. The Foundation has been active since 2007 with the mission of spreading the culture of social responsibility in working in the area, to sensitize the national context on globalie themes to develop civic projects of urban land valuation. The headquarters of the Riccardo Catella Foundation and the public garden that surrounds represent a blend of culture, design, street furniture, dining and civic initiatives, an unprecedented social space in Milan: why the ground floor of the building is occupied by the restaurant Ratanà .

The Riccardo Catella Foundation, since 2012, promotes the program “MiColtivo, Garden to School” orti didattici with the aim of encouraging the younger generations to a correct and healthy eating through the concrete experience of teaching gardens installed in the courtyards of the city’s public schools, providing a redevelopment of these public green spaces.