Milan is undoubtedly the Italian capital of fashion and one of the symbolic places of the international fashion level. It is precisely in the “quadrilateral” who over the decades have focused the main brands of national and global luxury. Access point is Via Montenapoleone, the most important and luxurious shopping street of Milan, Via della Spiga with the parallel and perpendicular Via Sant’Andrea, Via Gesù, Via Santo Spirito and Via Borgospesso form the heart of the district, historically known as the four Villages. Walking around the Quadrilateral can plunge a very special atmosphere made of elegant and colorful atelier windows. Among boutiques, are also prestigious buildings that host important cultural places:

Casa Bagatti Valsecchi Museum, in the same courtyard where we can find the famous restaurant “Il Salumaio“ .

Palazzo Morando with historical collections dedicated to costume, fashion and image.
Leaving via Montenapoleone to Corso Matteotti, you arrive in Piazza San Babila: until the beginning of the thirties of the twentieth century, the open space located in front of the homonymous church take the name of San Babila square .

The church of San Babila absolutely worth a visit, built in the eleventh century, on the remains of a previous place of worship and remodeled several times. 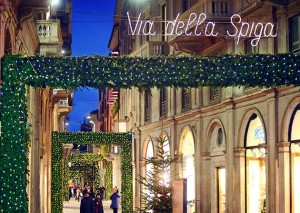 In the quadrilateral, I definitely suggest you at least three historical places: Restaurant: Il Salumaio

Corso Vittorio Emanuele II is the street which connects piazza San Babila to  Duomo square. Pedestrian area with arcades, where a succession of shops is one of the favorite places for shopping in Milan or simply to amble. On the right opens up before our eyes the Galleria Vittorio Emanuele II. If we walk to the end we will find ourselves in Piazza della Scala where we will be greeted by the majestic Teatro alla Scala . According to Piazza Duomo in the background we can see Via Torino.

Not to forget absolutely is a stop at the famous bakery LUINI . Here you will find a street food store in milan for excellence. There you’ll have to arm of patience for the row mileage that you will find, but I assure you that it is worth the effort, the panzerotti by LUINI, have made happy whole generations milanese….. you can’t miss them.

TORINO STREET: THE COMMERCIAL DISTRICT AND THE CITY’S HIDDEN

Important link between Piazza Duomo, the columns of San Lorenzo and the canals, via Torino is one of the oldest streets of Milan characterized by a long commercial tradition.
Here you will find many fashion houses and many shops to suit all budgets. Follow it, however, are not only stores: there are glimpses of a Milan little known that deserve some slight detour: from Renaissance jewel of the Basilica of Santa Maria presso San Satiro, the beautiful and hidden piazza Sant’Alessandro.