ATM City Tour  is one of the ATM service dedicated to tourists who can visit the monuments, palaces, museums in Milan traveling on trams “trucks” of 1928 and the Gran Turismo bus. The tour is accompanied on board by an audio format for free download in the app on your smartphone or tablet.

The service is a “hop on – hop off”, it is possible to get on and off from any of the scheduled stops along the four routes; two of these are served by the historical tram “trucks”, the other two by bus Gran Turismo; trams and buses moving through the city to the discovery of more than 60 points of interest along the routes.
The audio guide app “ATM Milano City Tour”, available in 6 languages ​​(Italian, English, French, Spanish, Chinese and Russian). 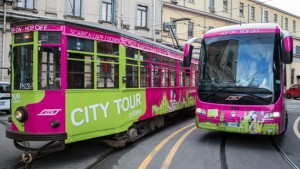 The five red double decker buses are now part of the Milan scene and are increasingly appreciated by those who want to see Milan without having to deal with the fast pace of the city.

The commentary in 8 languages ​​(Italian, English, French, German, Spanish, Portuguese, Japanese and Russian, with disposable earphones) allows you to discover and visit the Sforzesco Castle, the Basilica of Sant’Ambrogio, the Park of the basilicas, get up the area of ​​Leonardo’s canals, where you can participate in a mini-cruise on the canals of Milan.

The bus tour then continues towards the Cathedral to pass under the Madonnina and then reach the Teatro alla Scala; The longer tour takes guests also on the shopping streets where 2 km non-stop windows attract the most demanding customers and international.

The ticket is valid 48 hours.

The lines A and B also have a commentary for children, full of curiosity and interesting anecdotes, and easy access for the disabled. 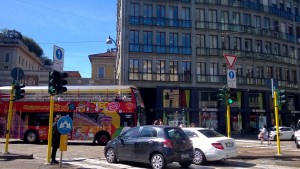