The district of Sant’ambrogio

The Sant’Ambrogio neighborhood, which hosts the homonymous Church, has its origin at the end of the Fifteenth century by Ludovico il Moro, which promotes the building up, calling the area “Borgo delle Grazie”, where the residences of his courtiers will be located.

Today, the area is characterized by an extraordinary wealth of historic and artistic testimonies belonging to different epochs: it is certainly the most famous is the complex of Santa Maria delle Grazie, since 1980 in the Unesco world Heritage List.

After the Duomo, the Church of Santa Maria delle Grazie is one of the christian monuments the most important in the city. It is a basilica and shrine located in the heart of Milan, an imposing work of architecture, which presents on the two sides of the seven chapels of the square to each side dedicated to the Virgin of the Graces. It is the emblem of religiosity catholic , and is linked in an indissoluble way to the fresco of Leonardo da Vinci, the last supper, also known as “the Last supper“, preserved inside in the refectory.

The last Supper by Leonardo da Vinci attracts thousands of visitors each year from all over the world. If your intention is to be one of the lucky visitors, my advice is to book well in advance. (prenotare) 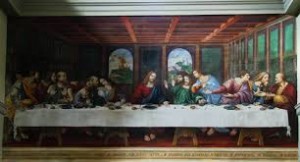 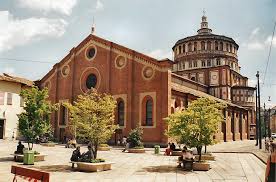 When you arrive at Sant’ambrogio square  the scenery changes again: the basilica of the same name is traditionally considered, in order of importance, the second church of Milan and it represents a reference element of the city identity and image of the city. Built between 379 and 386 in 789, is flanked by a benedictine monastery. Despite the current appearance is in large part the result of the restorations of the nineteenth century, the basilica is the most important expression of romanesque lombard. Furthermore, the area is much frequented not only by tourists but also by students because it is home to the Catholic University of the Sacred Heart.

It is a must to take a ride to the Catholic University of the Sacred Heart, (Università Cattolica del Sacro Cuore)  built in the old monastery of the Abbey of Sant’ambrogio ( Abbazia di Sant’Ambrogio ) and enter in the Garden of the Virgins, a place where (by tradition and by theory alone), the men could not access.

The Basilica of Sant’ambrogio, dedicated to the patron saint of Milan, is another of the Church of the “Borgo delle Grazie” of rare beauty not to be missed.

The Basilica of Sant’ambrogio is one of the rare churches to have two towers, but it has other quirks, little-known.

Just outside the basilica, on the left, there is a marble column . This column has two holes . The particular distance between them is about 25 centimeters. According to the legend the devil tried to shake the faith of the saint, tempting him, without success.

Frustrated by the determination of the saint, the devil, he gave vent to his anger by taking to cornate the column. This would bring the disconcerting holes according to legend, they hould smell an unmistakable smell of sulphur… 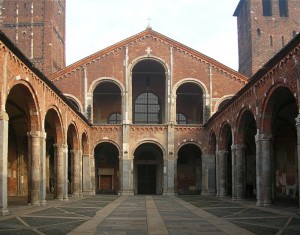 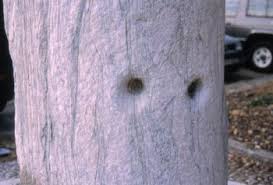 A walk along Corso Magenta – on foot or by tram – allows a real sightseeing. From Santa Maria delle Grazie towards the city centre, we find the Palazzo delle Stelline , former Benedictine monastery adjoining Park Convention Center now stands on the famous “Orti di Leonardo,” land of vineyards that Ludovico il Moro was donated to reward of many works. Certainly worth a visit especially during the Salone del Mobile (Forniture Fair) where you can also find spectacular installations. 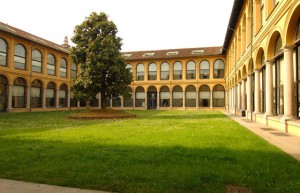 More ahead, on few tens of metres you can visit Palace Litta with the homonymous Theatre, the Civic Archaeological Museum and the Church of St. Maurizio al Monastero Maggiore. With a little detour, it is possible to discover a foreshortening of enchanting city and not much well-known.

Entering road Brisa, one enters into the “Roman Milan”:

The remains of the Imperial Palace (III – IV sec), directly connected with the near circus, together with the Ansperto tower – inside the Archaeological Museum (Civico Museo Archeologico)  – they are between few material testimonies of the period in whose Mediolanum capital of the Empire has been a Romano d’ Occidente and official seat of the emperor. 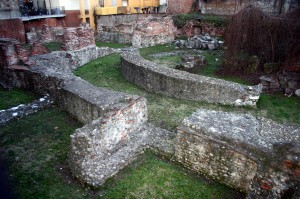 THE GENIUS OF MILAN AND LEONARDO

Not far away is the church of San Vittore al Corpo, the area of which housed since the IV century, the basilicas and the tombs in the early christian and the imperial Mausoleum. The former monastery, restored in the Fifties of the Twentieth century, houses the National Museum of Science and Technology ( Museo Nazionale della Scienza e della Tecnologia ) and represents the museum institution in the town nearest to the spirit of Milan, with its rich collections, from the bequests of major banks and industrial groups, reconstruct the stages of scientific evolution through approximately 10,000 objects on display in 40,000 square meters of the museum. From August 2005, to the side of the pavilion, the railway, has exposed the famous submarine Enrico Toti. Of particular interest, then, is the Leonardo da Vinci Gallery with a collection of machinery designed by Leonardo scientist, inventor, and futurist, carefully reconstructed in the models.