Duomo square is dominated by the… the Duomo of Milan ( Duomo di Milano) – the first works date back to 1386 – the monumental cathedral with baroque facade and the spires in the neo-gothic style, one of the largest in the world (the third catholic church in Europe after St. Peter’s in the Vatican, and that of Seville), surmounted by the symbol of the city: the Madonnina , a statue in gilded copper, made in 1774, by Giuseppe Bini and high-4,16 metres. 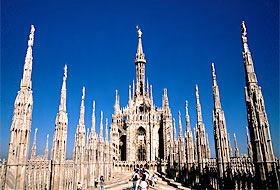 It’s absolutely worth to climb up to the Terraces where you can admire the Tiburio, the spires (the oldest dates back to 1404), and a magnificent view on Milan.
From its terrace it has an incomparable view of the city!
Next to the Duomo is the Royal Palace ( Palazzo Reale )  – XI century – which houses temporary exhibitions and the royal apartments.

Located on the top floor of Rinascente , in one of the most exclusive locations in Milan, the  Maio Restaurant  offers the extraordinary opportunity to have a diner on the wonderful terrace with an exclusive view on the spires of the Duomo of Milan.

Not to forget absolutely is a stop at the famous bakery LUINI. Here you will find street food in milan for excellence. There you’ll have to arm of patience for the row mileage that you will find, but I assure you that it is worth the effort, the panzerotti by LUINI , have made happy whole generations milanese….. you can’t link.

On  Duomo square stands the Galleria Vittorio Emanuele II , the “lounge of milan“, an elegant street covered by structures in iron and glass, both of which overlook the prestigious shops, restaurants, trendy bars, and libraries. Among these is the historic ” Restourant Savini ”.

Started to build it in 1865 on the project of the architect Giuseppe Mengoni and completed in 1867, the Galleria Vittorio Emanuele II, was dedicated to the king which began in 1867 .

Was made to link the Duomo square with the Scala theatre.

The Galleria connects the piazza Duomo at the intersection of the two arms of the Gallery , where there is a large octagon which reaches a height of 47 metres, and on the pavement of which is depicted in the heraldic symbol of the Savoy around which there are the ones of the 4 most important cities of Italy:

the lily of Florence, the bull of Turin, the red cross in a white field Milan and the she-wolf of Rome.

The heraldic symbol of the Savoy with a white cross on a red field depicts the famous bull with the “attributes” view.

The custom says that it is good luck to put your foot above the “attributes” of the bull (symbol of strength and power) and make a rotation with your eyes closed by pivoting on that foot.

Thousands of tourists and milanese every day crush them ritually as a good luck charm!

the legend, however, tells us that it brings good luck to rotate 360° with the heel of the right foot on the testicles of the bull only to 24 hours of the 31 of December!! Of course, everyone is trying any day of the year and at any time, as you can see from the wear and tear of the marble. Does not harm to try! 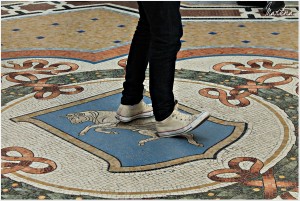 If you are in the Area of San Babila, you can not miss the unique and unforgettable sensory experience , you should definitely go to visit the Institute for the Blind , where you can participate in the DIALOGUE IN THE DARK (DIALOGO NEL BUIO ).

A strong experience, but it’s totally worth it.